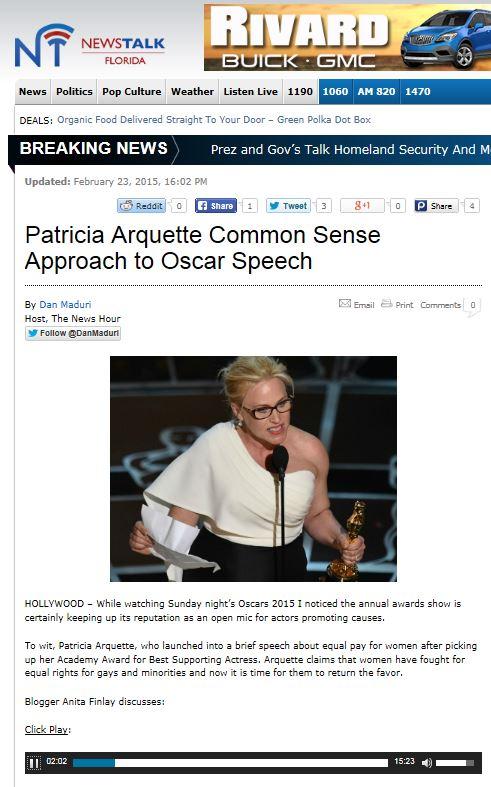 My appearance today with Dan Maduri on NewsTalk Florida talking Patricia Arquette’s activist statement at the Oscars on behalf of women, the reality of women in today’s workforce and the gender discrimination that remains.  Click the pic below to hear our interview: Click the pic to hear our interview… http://www.newstalkflorida.com/patricia-arquette-common-sense-approach-oscar-speech/   post this

By now, Patricia Arquette’s Oscar speech on behalf of women’s equality has gone viral. As much applause as she received for her remarks, the backlash has been loud, too, i.e., she was wrong because her speech excluded certain groups, because she is wealthy, because she only spoke of mothers. Whether or not Arquette erred in making her statement during an Awards telecast, by expecting her...

in Feminism, Oscars, Sexism, Women at the Box Office

Patricia Arquette brought excitement to an otherwise lackluster Oscar telecast with her impassioned speech on behalf of women’s equality.  Upon accepting the award for Best Supporting Actress, she stood before a worldwide audience of 1 billion and declared: “To every woman who gave birth to every taxpayer and every citizen of this nation, we have fought for everybody else’s equal rights. It’s our time to...