Who Is Behind The New York Times’ Treatment of Hillary Clinton? 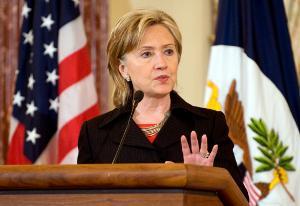 The New York Times has thus far refused to apologize for their false story about an IG criminal probe being requested against Hillary Clinton. When her team penned a 2,000 word damning dissection of NYT falsehoods, asking that Executive Editor Dean Baquet take responsibility, he refused to do so, also declining to publish their letter. That the “paper of record: looks to be waging a campaign to destroy a major presidential candidate with false information feels unprecedented.  In our interview, Epic Times founder and popular radio host Jerry Doyle asked me who “has it out” for Hillary — and why — at what is purportedly a liberal institution.
I first suggested Jerry “follow the money” to find out if publishers or shareholders have an agenda looking to stop her candidacy.  Blogger All Been Arranged and others have theorized that the paper’s Clinton hate links to allegiance to the Bush family. I was suspicious but perhaps this is worth examining.  After all, Whitewater and the hunting of Bill Clinton started at NYT when Clinton defeated papa Bush in 1992. Judith Miller’s reporting helped to sell the Iraq War in 2002. When G.W. Bush ran for re-election in 2004, the paper withheld a story that would be damaging to him, saying “they didn’t want to influence the election.” Now it is Jeb Bush getting softball coverage by the paper as Hillary Clinton is daily raked over the coals. Is there a connection? You be the judge.
Since she had a great record as a NY Senator, of which The New York Times is well aware, why would they malign her?
Putting their gross disrespect of her in context:  several years ago, comic Bill Maher took his misogyny too far, calling Sarah Palin a “c**t” who should be “splayed out on the hood of a car.” The Times gave him editorial space to defend himself and distract from the issue. Hillary Clinton, whose Presidential campaign was slandered by the “paper of record” with a blockbuster false story, was not given space.

Jerry and I discuss the truth of her record beyond the paper’s spin and offer our theories as to The New York Times suspicious behavior when it comes to covering Secretary Clinton. As many major reporters not with the paper have now admitted, NYT has a big Hillary problem.  Don’t miss a great interview! And then chime in…why do you think The New York Times is behaving this way?