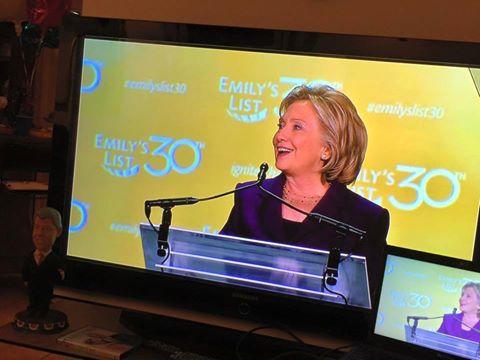 Hillary Clinton’s speech at Emily’s List 30 Year Gala Tuesday night revealed a woman at the top of her game, relaxed, warm and on message as she offered up a preview of her likely Presidential campaign themes. Pushing equal pay for women, and paid leave, for example, she employed the same logic she used as Secretary of State in countries where the moral argument might not work — that women’s economic empowerment helps the entire family and grows the economy for all.
Clinton stressed keeping Wall Street’s practices in check, as well as corporations that take advantage of loopholes not accessible to small businesses.  She spoke of the necessity of removing outdated red tape that functions as an obstacle to small business growth and the need for union bargaining protections and investing in innovators:

“We’re fighting for an economy that includes everyone and works for everyone.”

Another important theme was our need to adapt to the changing jobs landscape, making the rules clear so that we might master the 21st century economy.  Stating that the recent gains we have made “are real, but fragile,” Secretary Clinton offered a hint that a part of her platform will, of necessity, be a prescription for strengthening those gains for the middle class.
Hillary Clinton concluded by urging women to jump into the fray in local, state and national elections. But her money line of the night, which likely got a standing ovation, was:

“Don’t you someday want to see a woman President of the United States?”

If the lady I saw Tuesday night is the one who shows up to campaign for the Presidency, Republicans will have their hands full.