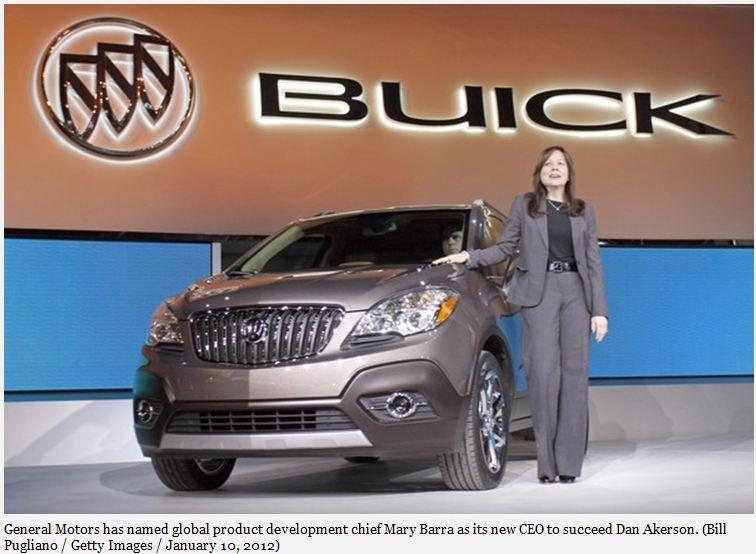 Starting at GM as a teenaged intern and rising to global product development chief, Mary Barra, now 51, has been made the company’s first female CEO.  According to the LA Times, she is now the country’s most powerful woman executive.  While Ms. Barra’s appointment may seem to represent a trend toward female leadership, echoing that of Marissa Mayer at Yahoo and the likely confirmation of Janet Yellen as Fed Chair, women are still grossly outnumbered and under-represented in Fortune 500 boardrooms.
Only 7 of Fortune 500 companies have boards that are at least 40% women, but according to the latest Catalyst Bottom Line Report as cited by President Ilene H. Lang, “[F]inancial measures excel where women serve on corporate boards”:

“This Catalyst study again demonstrates the very strong correlation between corporate financial performance and gender diversity. We know that diversity, well managed, produces better results. And smart companies appreciate that diversifying their boards with women can lead to more independence, innovation, and good governance and maximize their company’s performance.”
The report found higher financial performance for companies with higher representation of women board directors in three important measures:

Despite the obvious financial benefits to both men and women by having greater female inclusion, women’s participation at executive levels in 2013 remained flat.  According to Crain’s New York Business:

Females held just 14.6% of executive positions at Fortune 500 firms, the fourth year in a row with no growth …and only held 8.1% of the top earning positions at America’s largest companies, a figure that’s flat with 2012.

Women held 16.9% of corporate board seats in 2013, a slice that hasn’t grown for eight years. Women of color continued to fare particularly poorly, holding just 3.2% of all board seats.

While Facebook COO Sheryl Sandberg claims that women need to do more “leaning in,” the real story is that they continue to have a harder time advancing, even while possessing the same or superior qualifications to their male counterparts.  Look at Twitter, for example, which until just a couple of months ago had an all male board, claiming they could find no qualified women, until a story at The New York Times quoted a headhunter who shamed the male-centric Twitter board by offering up 25 qualified females in the space of ten minutes.

Sarah MacBride and Poornima Gupta at Reuters reported that “at Pinterest, the four-year-old online bulletin board service that is valued near $3.8 billion, some 70 percent of the users are female. But the company’s board of directors is 100 percent male.”

GM did the right thing by appointing Mary Barra, an engineer, as CEO.  She is product-oriented and welcomes collaboration to consider  diverse ideas before deciding on the path forward.  It is interesting to note, however, that as current CEO Dan Akerson steps down, this is the first time the Chairman/CEO position is being split into two different jobs.  Mary Barra will not have the same power and responsibilities as her predecessor.  Theodore Solso will become Chairman of GM.  A woman well-versed in every part of GM’s business, product design and development, also possessed of a Masters in Business Administration from Stanford, is not going to have both titles.

In the past, women have tended to be appointed to senior executive positions when a company is already in trouble.  That high wire is a risky one.  If the woman cannot turn the company around in quick order, she is given the axe.  If Jamie Dimon, CEO of JP Morgan Chase, were a woman, do we really think he would still be CEO after presiding over a $4 billion dollar loss on his watch and also just having had to pay out a record settlement of $13 billion in fines?

Even as the current business and political zeitgeist offer the appearance of a trend toward female leadership, we still battle long-held perceptions questioning a woman’s ability to lead and “do the math.”  Study after study report not only the effectiveness of female leaders and legislators, but the advantages of having more women in the board room.  Until perceptions change, along with men embracing the idea that diversity is more than a nice thing to do, but will help their bottom lines, we will continue to see the kind of stagnating numbers reported above.

*********************
Anita Finlay is the author of Dirty Words on Clean Skin, a shocking exposé deconstructing the biased media narrative plaguing women who dare to lead.  Available in print and Kindle editions on Amazon. #1 on Women in Politics books for 16 weeks.
Like Anita Finlay, Author on Facebook.
Follow @AnitaFinlay on Twitter.