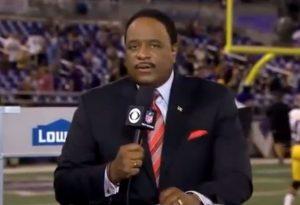 Ray Rice’s indefinite suspension from the Baltimore Ravens for the physical abuse of his then fiancée Janay Palmer has sparked a national conversation about domestic violence.

Even though the NFL seemed backed into a corner and had to hand out more severe punishment than its initially lenient “two game suspension,” it remains to be seen whether this subject will occupy a few more news cycles and then fade into the background, or if this is a watershed moment.

Sadly, we still treat women with such disrespect in this country.  Continual objectification of women makes them seem less real and also makes the threat of violence they face every day feel less grave than it is.

I applaud CBS sports anchor James Brown both for his comments about men taking responsibility to stop perpetrating violence and for asking all of us not to look away.

Jerry and I discuss my latest article on the subject and more. Please give a listen to this powerful interview and share.

Keep the momentum going.  This is a conversation we need to keep having of we are ever to see change.  4 thousand women are killed every year at the hands of a current or former domestic partner.