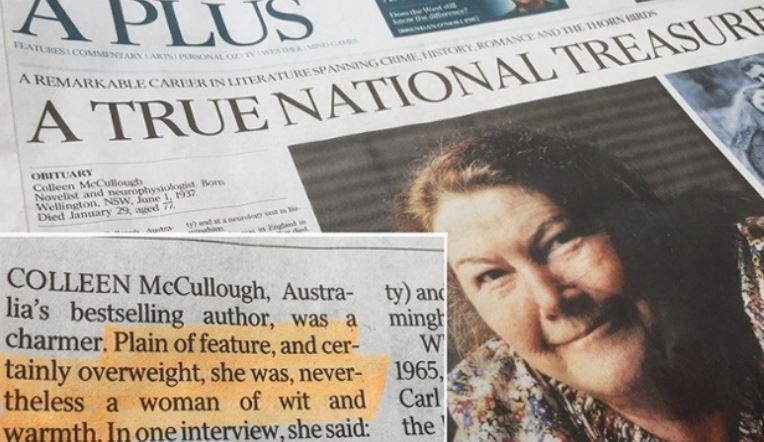 Beloved author Colleen McCullough, best known for The Thorn Birds, a book that sold 30 million copies worldwide, just received an obituary all but ignoring her many successes and the fact that  she was a Neuroscientist at Yale.  The Australian offered this in their opening paragraph: “…Plain of feature, and certainly overweight, she was, nevertheless, a woman of wit and warmth. In one interview, she said: “I’ve never been into clothes or figure and the interesting thing is I never had any trouble attracting men.”
The Guardian’s Rebecca Shaw beat me to the punch in comparing this travesty to a New York Times obituary, circa 2013, where Yvonne Brill, rocket scientist and recipient of the National Medal of Technology and Innovation from President Obama, was first remembered for her “mean beef stroganoff” and mothering abilities (in shame, NYT has since amended their obit).  Similarly, Ms. McCullough’s accomplishments were not as impactful as the fact that she was “overweight,” plain” or, in what I can only assume was a shock to the obit’s author, that she was still able to “attract men.”
A woman has every right to be acknowledged for her body of work, not how her body fits into a dress.
The word “nevertheless” is likewise churlish, as if a “plain” or “overweight” women could not be a person of “wit and warmth” except by freak accident.
The obituaries’ diminishing reportage speak to our need for a paradigm shift.  Many men support and encourage women’s efforts and excellence.  It would appear not enough of them have access to ink by the barrel, however.  As long as these men see women only in terms of how a female can or should fit into their own picture frame – and those men construct our daily media narrative – women will never be considered equal in society or be taken seriously in leadership positions.  Women who celebrate the stories of men over their own also do little to change this equation.
The good news is another article in The Guardian ridiculed McCullough’s obituary, sharing the twitter backlash of professionals who likewise wondered how their lives would be belittled by such an obit.  (Suggested and entertaining reading)…here are a few of the tweets: 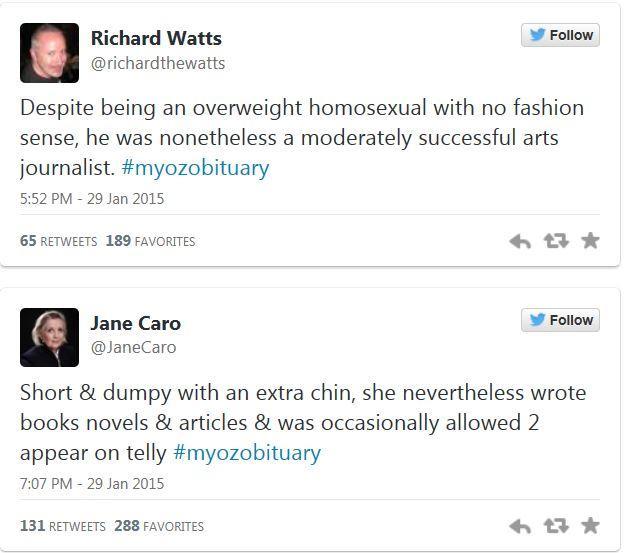 The reaction in social media makes clear that there are men out there who find this equally offensive, yet may get drowned out by those who still hold positions in the press that have not caught up with the rest of us.
It is also possible that men who write of women in diminishing fashion do so because they find an accomplished woman a threat to their own resumés, rather than allowing that such a woman could actually educate them and thus, enrich their lives.
Some questions for them:
Is it that big a departure to see a woman as an independent entity not beholden to or merely the appendage of a man?
Is it disconcerting to some part of the male identity if a woman stands side by side with you just because she wants to – not because she needs you to raise her profile.
Could it be okay if just knowing her raises yours?
***************************
Anita Finlay is the bestselling author of Dirty Words on Clean Skin — exposing media bias in a society not as evolved as advertised.  #1 on Amazon’s Women in Politics books for 16 weeks.
Like Anita Finlay, Author on Facebook.
Follow @AnitaFinlay on Twitter.
Share
0