Why is Martin Bashir Still at MSNBC? 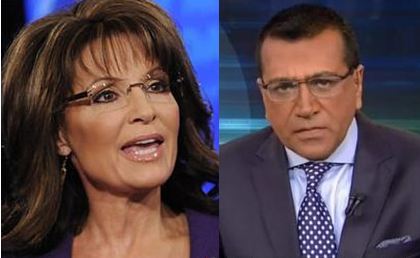 No punishment has yet been meted out to Martin Bashir for his despicable comments suggesting that someone defecate and urinate into Sarah Palin’s mouth, which reveals the truth about the leadership at MSNBC.  We must have a zero tolerance policy for violent rhetoric no matter the source, no matter the subject.  Feminists who have remained silent should be outraged regardless of their feelings toward Palin.  If I rejoice that a woman I disagree with or dislike is on the receiving end of destructive treatment, I may look less seriously at sexist transgressions. If they abuse her, they may abuse me in the same manner when I become likewise inconvenient. I won’t have redress against their tactics since I gave permission for their earlier bad behavior by my silence. The slippery slope slides both ways.
This is not the first instance of a man threatening a woman with debasement in order to silence her.  Hustler Magazine doctored a picture of conservative journalist S.E. Cupp, putting a phallus in her mouth in order to punish her for her political views.
David Shuster, a former MSNBC fill-in anchor pointed out that he was suspended for two weeks in 2008 for stating that the Clintons were “pimping out their daughter out in some weird way.”  Yet Bashir gets a pass?  His apology is not enough.  His behavior was not a spontaneous lapse, but as well stated in an article by my sister blogger Whitney Zahnd, a premeditated rant loaded onto a teleprompter.
We have enough violence directed toward women in this country.  Had Bashir made such a statement about First Lady Michelle Obama, he would have been fired, regardless of what prompted his remarks.  For that matter, had David Shuster directed his “pimping out” comments toward then-candidate Obama and Mrs. Obama in 2008, he, too, would have been fired.  Bashir’s commentary should not be condoned under any circumstances.
MSNBC suspended actor Alec Baldwin and his show “Up Late” over his recent homophobic slur.  It is in doubt that his show will return at all.  So racism and homophobia are unacceptable but filthy, degrading comments of this nature directed toward a woman are to be excused?
Bashir’s faux outrage was prompted by Palin calling our federal debt, and indebtedness to foreign powers, a type of slavery.  This is an equivalency political operatives on both the left and right have used.  Ms. Zahnd reports that Bashir himself used a slavery analogy two years ago when arguing against a “return to traditional marriage.”  If Mr. Bashir found Palin’s comments distasteful, he could have made a forceful argument without seeking out so vile an example – but his motive was not to be right.  It was to degrade.  Bashir seemed on the hunt for the basest way to ridicule and punish Palin, thinking that viewers at MSNBC would be a grateful audience for his remarks.
As former Clinton White House spokesperson DeeDee Myers tweeted – where did he even come up with such an idea?  She called for Bashir’s firing:

Honestly…where do such thoughts even come from? #Gottago. MSNBC not saying whether Martin Bashir apology is enough http://t.co/5ElIrTM1bn
— Dee Dee Myers (@deemyers) November 20, 2013

By Martin Bashir using the rhetoric he did, not dissimilar from Keith Olbermann, David Shuster and Chris Matthews who preceded him – he only seeks to scrape the bottom of the barrel.  And his apology notwithstanding, he got away with it.
Any woman who believes she will be exempt from this treatment by virtue of party should have a conversation with Hillary Clinton.  In the 2008 presidential primaries, on TV, in print and on radio, pundits far and wide daily referred to her as “bitch,” “she devil,” “Nurse Ratched,” “hellish housewife,” “white bitch,” a “stranger to oral sex,” “shrewish,” “shrill,” “yapping troll,” “corporate whore,” “vaginal American,” a “Femi-Nazi” with a “testicle lockbox,” “frumpy, stumpy and myopic,” a “big f***ing whore,” and of course, a “racist.”
The bulk of that commentary emanated from the left – not just Rush Limbaugh.
The feelings one has about political figures on the left or right don’t matter.  Like racism or homophobia, misogyny cannot be tolerated.  This is not a matter of degree, nor can there be any excuse made by virtue of someone’s political views.  Without a zero tolerance policy, there is no credibility.
There are plenty of legitimate, intelligent arguments to be made to discredit or expose someone in the wrong.  Name-calling or wishing disgusting acts of violence to be perpetrated on an opponent is not only an act of cruelty, but the refuge of a weak mind.
The flame throwers at MSNBC cannot rightly call themselves a news organization.  They are there to promote a particular agenda.  However, there is a reason their ratings are so low, as even millions on the left side of the aisle find their bombastic echo chamber so distasteful and tiresome, they no longer listen.
Lifting the level of our discourse with our opponents will attract followers more than sinking to the lowest common denominator to debase them.  If someone like Bashir cannot do that, he has no argument to make, and no place in a public forum.