What Makes It Harder for Women to “Have it All”—or to Have Any? The Truth Behind Disempowerment

by Anita Finlay
Anne-Marie Slaughter set tongues wagging with her controversial Atlantic cover story “Why Women Still Can’t Have It All.”  In a WaPo opinion piece, Katrina vanden Heuvel argued that while high powered career women like Slaughter cope with the pressures and guilt of juggling work obligations and family, it is lower income “working mothers [who] face far more daunting obstacles simply trying to keep their families afloat.” 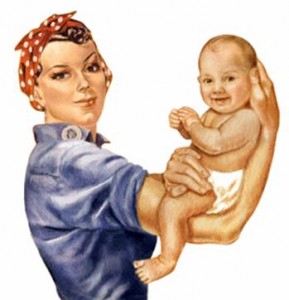 They have few options in case of emergency or family illness.  They work or they don’t eat:

More than 70 percent of all mothers and more than 60 percent of mothers with children under 3 are in the workforce. Two-thirds of them earn less than $30,000 a year. Nine of 10 less than $50,000…. Half are their family’s primary breadwinner.

Vanden Heuvel states that these women’s stories are largely ignored.  We focus more on the glamorous struggles of the successful than those who fight through poverty or a state close to it.
She mentions Greg Kaufman of The Nation’s blog, who writes of Adriana Vasquez, “a 37-year-old single mother of three working as a janitor in Houston,Tex.…For this she is paid $8.35 an hour, and she and her colleagues average $8,684 per year.”  Vasquez’s fellow janitors are currently working to negotiate a wage increase to $10 dollar an hour, phased in over three years.  JPMorgan is a major owner of the buildings where these janitors work.  Ms. Vasquez, with the help of the Service Employees International Union, was able to go to Washington and confront JPMorgan Chase CEO, Jamie Dimon on this issue:

“Despite making billions last year, why do you deny the people cleaning your buildings a living wage?”

Dimon’s security guard acted as if she were bearing a deadly weapon, surrounding Dimon and moving him away, as he told her to “call my office.”

I believe in capitalism and don’t begrudge anyone making it big in this country.  But is it a bit much that this man earns almost $21 million per year when Ms. Vasquez works ridiculous hours and can barely feed her family?
It is likewise troubling that JP Morgan Chase just lost $2 billion dollars because of a faulty hedging strategy (the loss will probably amount to 10 times that number because of a drop in share value) and the person fired for the “mistake” was a woman—Chief Investment Officer, Ina Drew.  For 30 years, she was an ace.  Not any more.  The most powerful woman on Wall Street is gone and unlikely to be replaced any time soon.  Yet her boss, Mr. Dimon, the man in charge of Drew and the whole shebang, still has his cushy gig and has escaped unscathed.  He also recently testified before Congress wearing his ceremonial Presidential cufflinks.  It’s good to be king.  That is another part of the woman’s struggle that is underreported – the remaining predisposition toward the boyz network.
It is important to link the dots to these varied events because of Ms. vanden Heuvel’s next statement:

“Slaughter is smart enough to recognize that the “majority of American women face problems far greater than any discussed in this article.” She makes sure to note she is writing for her demographic, “highly educated, well-off women who are privileged to have choices in the first place.” And while she envisions more women at the top, changing workplace culture and policies, she fails to note the discrimination that still keeps so many of them from reaching those high positions. Slaughter sees the best hope for improving women’s condition as closing “the leadership gap: to elect a woman president and 50 women senators.”
I’d like to think that is true, but leaders such as Margaret Thatcher and Michele Bachmann raise doubts.”

Two points scream at me.  First, she mentioned two conservative women as if they are the only examples of female leadership.  I gather she is intimating that they are bad choices. If her argument is that bringing more women into leadership positions would not necessarily make a difference in the plight of struggling women, this is nonsensical on its face.  She covers the struggles of women but seems blind to those who have done the most to alleviate it.
In 1992, the last “year of the woman,” when we swept into office in great number, more legislation was passed to help women in the work place and protect against violence.  Further, we all learn by example.  When women achieve, when we stand up, it sets an example and gives courage to other women to do the same, whether or not we are on the same side of the aisle politically.
Second, vanden Heuvel says real women need to “rise up and tell their stories.”  But how can they do that when it appears men in power are not interested?  And right now men need to be interested because they control the narrative.  The shocking 2012 study conducted by the 4th Estate, much discussed on this blog and others, revealed that men are solicited for their opinions in news articles five times as much as women – even on women’s issues!  Get that?  Five times as much.  Not coincidentally, the ratio in Congress is five men to every woman.
Paul Farhi of WaPo said the study showed “reporters might have “an unconscious bias” when it comes to selecting people who offer expertise and opinions about the news.  The thinking [among reporters] may be that men have more authority on a topic than women do.”
No kidding.  That we still struggle with this in 2012 is disgraceful.
Our media is reputed to have a “liberal bias” and yet they do not grant a woman anywhere near equal credibility to men.  Ms. vanden Heuvel needs to be reminded that neither side particularly gives a damn about “women’s stories,” whether it involves women juggling high powered careers and family, a female janitor wondering how she is going to afford milk for her kids or the violence still plaguing women in this country.
We have a progressive President, yet when he had a near super majority in Congress his first two years in office, he did not attempt to pass the Fair Pay Act.  And sorry, the Lilly Ledbetter Act does nothing to change the current pay disparity.  In an appearance on ABC’s This Week, Ms. vanden Heuvel touted the President’s ability to end “crony capitalism” and push for a “democratic capitalism that lifts all boats.”  But, like the Republicans she often criticizes, Mr. Obama is just as comfortable with crony capitalism.  Holding $40,000-a-plate fundraisers with the likes of Anna Wintour does alter that perception.  The Jamie Dimons of this world are just as safe in the company of our current president (despite the class warfare touted in his campaign rhetoric) as with Republicans.  I am not convinced either side is concerned with the problems we face here on the ground.
When are the varied struggles of women in all social strata ever to be a priority?  Isn’t that the real problem here?  Until we have more women in positions of power, shouting loud to do something about the issues of concern to Ms. vanden Heuvel, this will not change.
So when she expresses her “doubts” about us being helped by other women, she would do well to remember that men in charge are not getting the job done, and that studies have shown women to be more effective legislators.  But they will not rise up without the support of other women – and fair minded men.
And if we don’t even see the need for greater female numbers in leadership positions in government, in business, and in media, that is unlikely to happen.
**********************************************************
Anita Finlay is the author of Dirty Words on Clean Skin: Sexism and Sabotage, a Hillary Supporter’s Rude Awakening, available at Amazon.com in print and Kindle editions.
Follow her on Twitter: @AnitaFinlay
Like us on Facebook:  Anita Finlay, Author