The Brilliance of Malala, Jack Andraka, Janet Yellen and the Value of Role Models 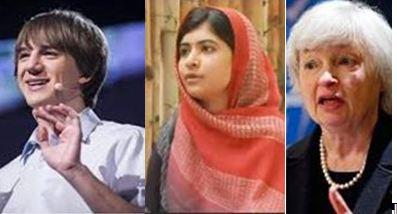 CBS’ 60 Minutes recently celebrated Jack Andraka, a cancer researcher who won the grand prize at the Intel International Science and Engineering Fair at age fourteen.  His meteoric rise to prominence for his invention of a simple, inexpensive test to diagnose pancreatic cancer, a disease with one of the highest mortality rates, is a story of exceptionalism that touches, inspires and reflects the vital need for more coverage like it.
After many had turned him down, Andraka was given the use of a lab by the forward thinking Dr. Anirban Maitra.  While it could take years for Andraka’s elegant proof to pass muster in large scale clinical trials, the fact that this high school junior has been possessed of an obsession with science since he was a toddler is something that should be shouted from the highest hill.
The inspiring bravery and brilliant speeches of sixteen-year old Pakistani activist Malala Yousafzai, who defied the Taliban by insisting that girls be educated, surviving a bullet to the head for her trouble, is moving beyond words and offers hope to those who fear that a lone voice can do nothing.  Malala was just nominated for the Nobel Peace Prize.  If you’ve not seen her with Jon Stewart on The Daily Show, you owe it to yourself to watch this amazing young lady.  Per USA Today:
Sixteen-year-old Malala Yousafzai brought down the house at The Daily Show with Jon Stewart when asked what she would do if attacked again by a Taliban gunman.
“I would tell him how important education is and that I would even want education for your children as well,” the Pakistani girl said. “That’s what I want to tell you, now do what you want.”
Thunderous applause followed.  Stewart sat awestruck, his hands covering his mouth.
While Mr. Andraka and Ms. Yousafzai’s upbringing, environments and daily reality could not be more different, they have one thing in common – parents who stand with them and encourage that which is excellent, principled and different about them.
Perhaps not as earth shattering, but another example of leadership was offered by eighth grader Julia Bluhm, who gathered 80,000 petition signatures in order to stop Seventeen Magazine from airbrushing its photographs of teenaged girls.
The power of this kind of behavioral modeling cannot be underestimated.  The more we see just what can be accomplished, the more we, and our children, will dare to reach past those who say, “No, you can’t.”
Even the nomination of Janet Yellen as the first female Fed Chair – a position for which she possesses stellar qualifications, gender notwithstanding – seemed almost impossible a few short weeks ago.  If the brusque and deregulation-happy Larry Summers, arguably the President’s favorite, had not imploded, he would certainly have been nominated over her.
But since Yellen prevailed in this unlikely scenario, we are reminded that just as with trailblazers Malala, Andraka, and Bluhm, this woman of a different generation has an equal opportunity to inspire in a field where few women have power over worldwide monetary policy, and it’s not because they can’t do the math.
Per Catherine Boyle of CNBC:

Yellen could help motivate younger generations to succeed in an era when few women still make it to top roles in the business and economics world—despite high-profile drives for equality and academic success.

Her very presence will change perceptions.
Jack Andraka shows it’s possible for a high school kid to be a legitimate cancer researcher.  Malala Yousafzai shows that a young girl can face down brutality with her elegant words.  The examples they set help to break past stereotypes and limiting beliefs, leading the way for others to realize and celebrate their true potential.
You cannot celebrate what you’ve never heard of.  There is proof that the more a girl watches television, the less she imagines limitless possibilities for her career.  The female to male population is 51%-49%, and per an article in the Calgary Herald:

Two decades’ worth of study show that the male to female ratio in children’s themed content comes in at 3:1. And what roles there are for females are often stereotypical and hyper sexualized. The boys get the adventure and responsibility, while the girls are relegated to the background.

The stereotyping starts early.  Not only for women, but as to the kinds of male behavior we supposedly admire.  We cannot expect to be fed a diet of garbage and find inspiration there.
If we insist that positive, inspiring stories trump junk news about “twerking,” then we grow society past the lowest common denominator in the hopes that more like Malala Yousafzai, Jack Andraka, Julia Bluhm, and yes, Janet Yellen, will stand up to be counted.