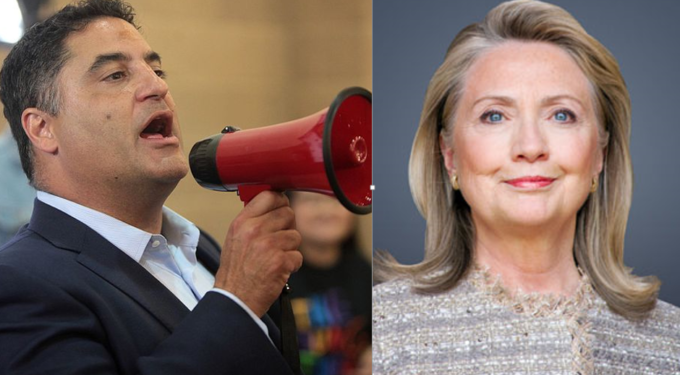 The New York Times’ Glenn Thrush and The Young Turks’ Cenk Uyger are the two latest “journalists” to be hoist on the petard of their own misogyny. As has been pointed out elsewhere, if you want to know why Hillary Clinton got such crap coverage in 2016, and in 2008 for that matter, you need look no further than the men who shape the “news” narratives we are fed every day.  No surprise that we are now finding out just how misogynistic, sexist and abusive many of these men are and have long been. Witness the great Charlie Rose being fired from PBS and CBS for sexual misconduct and harassment.  NYT Star reporter Glenn Thrush has a long list of grievances against him, but the “paper of record” is not even firing him, leading women employed there to wonder who cares about their careers.

Ladies, if you have to ask…

All of these guys had a hand in shaping the narrative in 2016. Little wonder why they were focused on berating Hillary Clinton, the most prepared candidate in a generation, and ignoring her policy positions. And anyone who thinks this is just about her is sadly mistaken. The exact same tripe will be, and is already being, leveled at powerful women, whether named Kamala Harris, Elizabeth Warren, Kirsten Gillibrand or anybody else who dares step up to the plate to upend the patriarchy in this country and around the world.

If you want to know why the United States ranks 83rd in female leadership, look no further than the daily sexist spin we endure.

What can we do about it? Simple. Stop believing these guys when they spew this crap. Stop.

Ask yourselves who is paying their salaries and take a moment to notice particular narratives and adjectives continually attributed to a particular woman – that would never be attributed to men. Like when NBC’s Chuck Todd accused Hillary of being “too prepared” – because the vile, vindictive three year old currently occupying the White House is much better?

The next phase of empowering female leadership and encouraging more women to step into leadership positions is to resist any knee-jerk inclination to defending a man while believing the worst tripe about a woman, though a cursory look at her record confirms that such smear has no basis in fact.

I can complain from the highest hill and so can you, but until we are able to reach people at the margins and convince them to let go their own confirmation bias, entertaining that those who are spinning the news may have motives of their own, (we’re looking at you Matt Lauer), we are going to get more of the same.

It doesn’t matter whether Hillary Clinton runs in 2020 or not, or Kamala Harris, or anyone else.  2020’s new version of “Bros” will be just as crude and ready to destroy a female candidate as in 2016, 2008 or when successful entrepreneur Victoria Woodhull ran for President in 1872.  She was referred to as “a lamp without oil.”

Since Cenk Uygur is the latest misogynist caught in the glare of the national spotlight, he is trying to rescue his reputation with a feeble apology. Don’t buy it. Any adult male who had talked about women in the gross frat-boy misogynist way that he did has not changed.  Women who still work with him have stated he behaves in ways that make them uncomfortable. NBC’s Matt Lauer – who was paid $25 million per year, kept a button under his desk to lock his office from the inside. Does anyone believe such a person will magically be rehabilitated or has one iota of respect for women?

I am sure the same is true of Glenn Thrush or Matt Lauer or Charlie Rose or any one of these guys who shaped news media coverage today – and their employers.  After all, the medium is the message.  The New York Times, NBC, CBS, FOX and more can afford to hire anyone they want – if they kept these guys (and complicit females like Andrea Mitchell, Maggie Haberman and Maureen Dowd) employed for so many years knowing their messaging and behavior, we cannot believe it is accidental.

Our only hope is that we stop buying the crap that they sell.