To say that Michigan natives Meryl Davis and Charlie White skated brilliantly last night would be an understatement.  Their main competition, Canadian 2010 Olympic Gold Medalists, Tessa Virtue and Scott Moir, were also spectacular, yet Davis and White were deserving of Gold, standing out above the rest; a fitting finale to their 17-year career on the ice together. 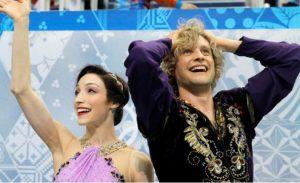 The grace, athleticism, fluidity and even danger in Davis and White’ performance is something that must be seen to be believed.  Watch their luminous free-skate here:

No matter how much I enjoy so many Olympic events, my emotion is saved for figure skating.  Maybe it’s all my years as an actor, knowing that you have two minutes to “nail it” in the audition, and whatever talent you possess is either evident at that moment, or not.  But what actors do is subjective.  If the producer is in the mood to buy Electrolux and not Hoover that day, somebody’s outta luck.  If we fall or fail, well, there’s always next time.  For so many competing at the Olympic Games, there is no next time.  One split-second error and they’re done, sometimes physically injured to boot.  That high wire act is unimaginable for most of us.  We don’t have to fly through the air in perfectly timed, death defying maneuvers and hope the judges score us favorably.

Embracing that level of risk and precision, last night’s Ice Dancing event stood out for a number of reasons.  It was among the best such Olympic competitions ever. First, the overall excellence of the nations’ teams that competed – to see everyone performing to the best of their ability and then letting the chips fall as they may is all anyone can ask for.  The look of elation on the dancers’ faces was its own Gold Medal.  Under unfathomable pressure, they showed up for themselves and for their partners.

It is the best we can expect from ourselves: to hit away.  As a favorite teacher once said, “You’ve won as soon as you step onto the stage.  Dare you the courage to be all of who you are.”  That is something to be proud of, always.

Deepest congratulations to Meryl Davis and Charlie White for their historic accomplishment.

Congratulations to all our amazing athletes, whether they medal or not, and to all athletes participating at the Sochi games.

Thank you for being in your excellence, for making the impossible look easy and for reminding us of the value of dedication, discipline and showing up.