2015 went by like a speed bump. Is it that I just turned 57, so every year races by faster than the one before it? Is it the dense time suck of social media and the phone addiction I share with millions? The sense that I fell short of the goals I set for myself? Or that, once again, I’m at a crossroads; an odd stasis awaiting the next creative burst that makes me leap into the fray, fierce as ever.
The crossroads thing is important to acknowledge. The times we say “yes” need appreciation and celebration to ensure we don’t live in the disappointment of not getting all the way “there.”
One way I stepped up was by partnering on Dare We Say, a show where my co-host, Shawna Vercher, and I get in front of the camera to dig into political, social and cultural news. Sometimes, we took on awkward, risky topics that made me have to beat back my invisible “who the hell am I…” b.s.  Just because I don’t do something perfectly doesn’t mean I shouldn’t do it. In the name of teaching that I most need to learn, I did it anyway.
Since my focus has long been women’s empowerment, this next part is hard for me to admit, but it felt brave getting in front of a camera at all. That’s an odd thing for an actor to say, yet as a character performer, my age was rarely an issue. On Dare We Say, I’m sitting in front of you, hoping you don’t mind looking at my “older face” while I impose my two cents. Society’s ingrained ageism had gotten under my skin, too. A powerful loop of those criticisms played in my head that almost stopped me from starting in the first place. That fear slowed me down.  Then, remembering that the wisdom — and beauty — that comes with life experience is also a thing to be celebrated and shared, I got over myself.  I’m sharing this with you because it’s important to say that the fear didn’t stop me.
I don’t like the idea of fear stopping anyone, so here’s an odd left turn (bear with me).
Over three years ago, my husband and I adopted an older tabby off the street as a companion for our twelve year old cat, Caruso, who had just lost his brother. Midge, a tiny alley cat, had severe trust issues and must have spent her first eighteen months with us hiding under a couch, the bed, her carpeted adobe, anywhere she could escape, not be preyed upon or abandoned again. We tried everything to coax her with scant results. To say Midge taught us patience is an understatement.
In the Summer of 2014, she began venturing out of her various hidey-holes. We don’t know why she decided it was okay to be downstairs with us, but day by day, she would take another leap forward. Perhaps she did it because we finally figured out we should only give Midge her beloved crunchy treats if she came down to the living room. I like to think the ghost of Anais Nin whispered in her petite, furry ear: “And the day came when the risk to remain tight in a bud was more painful than the risk it took to blossom.”
Midge did blossom. More than that, she and Caruso morphed from mortal enemies into great friends. 2015 made us witness to a great and most entertaining love between the two of them. Then in late September, out of nowhere, thirteen year old Midge was suddenly ill. The vet could do nothing for her and she passed away at home, on her own terms, just days later. Heartbroken as we were, we remembered how far she came and that she got to spend the last years of her life in kitty nirvana, cuddled up with us and her furry pal, gazing out at the garden she loved.
We will always thank her, not only for her precious, prissy walk, her “conversation,” her wonderful head butts and kisses but for reminding me of another Nin quote: “Life shrinks or expands in proportion to one’s courage.”
Rather than worrying where I do or don’t “get,” the venturing forward, the standing up to be witnessed and also to make a beautiful noise on behalf of others who likewise need witnessing is far more important. So here’s my promise for 2016: no matter where the day takes me, I’ll keep standing up.
I am grateful to you, as always, for taking my hand and joining me on this wonderful journey.
Wishing each of you abundance, joy, good health and a great adventure in 2016. I’m sensing great things ahead.
And oh yes… Win, Hillary, win! 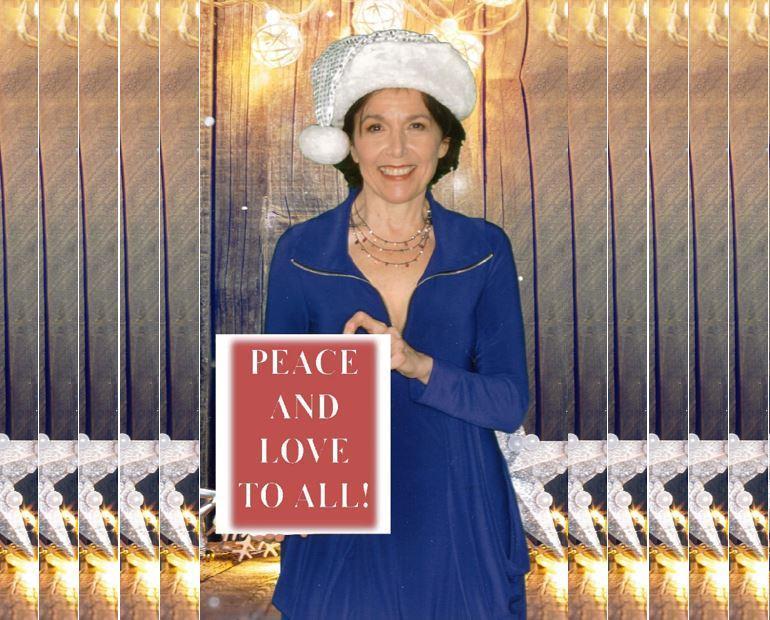