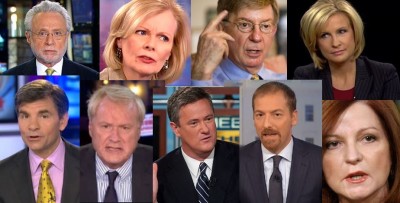 As nature abhors a vacuum, so the drive-by media is hungry to control and define any public figure whose impact might supersede their own. How do we beat them?  Whether we believe that Hillary Clinton’s “email-gate” is empty click-bait or something substantive, the amount of feverish news coverage generated in advance of securing the facts telegraphs that mainstream media is flailing in an effort to bring Hillary to heel – just as they would with anyone who defies their influence. Hillary’s popularity with the American people makes her the biggest target. But she is not, was not, nor will she be the only one.

Whoever throws their hat into the ring for the Presidency, we have an obligation to meet them in the middle. That does not mean we forgo our own wishes on policy. Only when we seek to hear from and communicate with them directly can we break past the bread and circuses we are fed daily by corporate owned networks looking to keep us distracted with conspicuous consumerism and scandal. The internet offers us an opportunity to break through like never before.

Seeing past media garbage is tricky. But as the Presidential race heats up in earnest, the candidates will get out on the stump and present their ideas. The degree to which (and how) mainstream media covers them will be in part predicated on us playing the “Yelp” card if reporters don’t do their jobs.

Sensationalism doesn’t require our support.  Talking heads are increasingly in danger of losing their numbers as sites like this one gain traction. Using your voice on social media to insist they toe the line, coupled with refusing to believe anything anyone tells you about a candidate until you bear witness yourself and form your own opinion is a powerful one-two punch. Might it help move the needle back in our direction?

Interesting that just today, The New York Times has started walking back their Hillary smears re her emails and writing softer stories about the “confusion” of the regulations.  Hmm.  While it is a far cry from the apology owed, these new stories would not have been published without the huge outcry from average citizens complaining of their horrid bias!

I know I’m an optimist, but I refuse to give up, thereby ceding every election to the inside-the-beltway crowd.

Jerry Doyle and I have a feisty “jaw session” on the subject. Enjoy and share your thoughts!